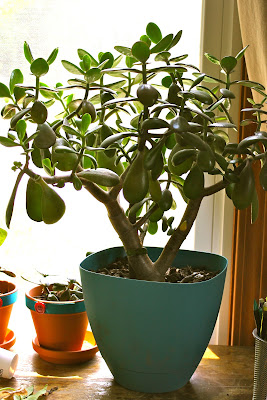 I admit it.  I have been a HORRIBLE blogger.  I blame it on the end of the school year and the return of my husband to the U.S. of A.  A girl has to make time for work and family before blogging, yes?

Alright, enough excuses.  Jon is home and really into the last Game of Thrones book (so we all know I won't be seeing him for a while).  All of my students' grades are in and I've managed to leave my classroom in decent shape for next school year.  It's time to do some bloggin'!

A few weeks ago, I noticed that some of my houseplants needed a haircut - and BADLY.  The little jade I bought at the farmer's market is now taking over the desk and the basket of creepy-crawly plants that I inherited from a friend have spread throughout the kitchen.  Where to begin?

I started doing a little research, just trying to find out what my plants required before the snip-snip action began. 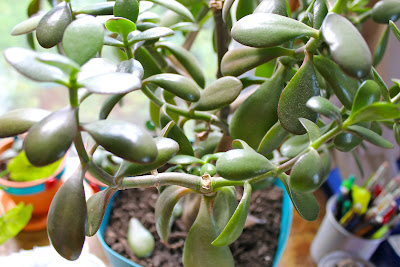 A jade with a callused edge from trimming.

Jades: These are best trimmed in the spring and early summer, since that's when the plant usually starts to grow new branches.  Cut the plant at a node, where you can see little line indicating a different segment and right after a leaf set.  Be aware that the plant will mostly likely stick up some new growth around this area so make sure it is in a place that you would like to see more jade branches.  Try not to mess with the open edge - you don't want any infection. 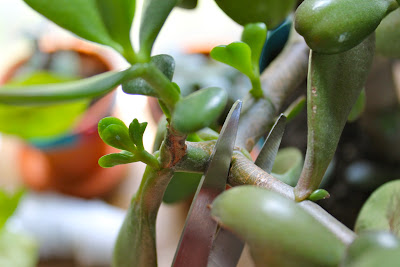 Here you can see where the new growth has emerged from the callused edge.

The cut off branches can be propagated for new baby jades!  They should be left to dry for 1-2 weeks in a cool, shady space.  The cut edge should have a callus before planting it, as the callus will discourage any disease.  Provide the propagated plant with some support and water about once a week, though you might have to water it more often as the plant starts to establish itself (don't let the leaves shrivel).  The baby jades will do fine in a small pot for about a year - they don't like too much space. 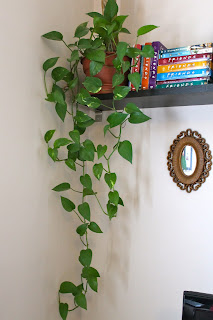 Philodendrons: These are those fun viney plants with heart-shaped leaves, which is perhaps why they were named "love-trees" in Greek.  They are great air-filterers and easy to take care of.  To give these a haircut and promote growth at the base of the plant, simply cut the vine at a place just after the node - these are spiny-looking.

To propagate, make a 45 degree cut just under another node and place the cutting in water.  Feel free to add some plant food, as this will promote root growth.  In about a month, you will see roots forming out of the spiny node.  Once you get a few strong roots, stick in a pot and water about once a week. 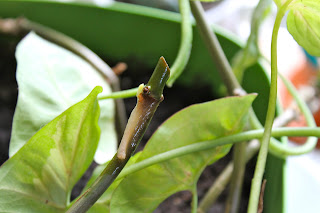 Both of these succulents benefit from sandy soil, though I can tell you that I have used regular potting soil and they look fantastic! 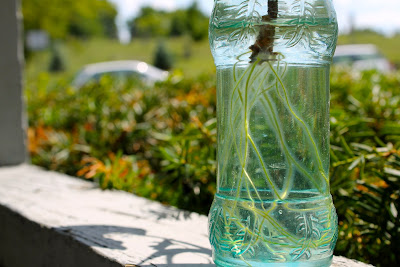 Check back in a few days to see what I did with these baby succulents (think crafty pots and great gifts)!  Happy planting!

Posted by Stephanie at 1:44 PM

Stephanie
Hi! My name is Stephanie. While most of my time is spent teaching middle schoolers, my real passion lies in making delicious food, homemade gifts, and gardening. All great things in life are meant to be shared and that's why I love sharing my projects with family, friends, and my fellow crafters, foodies, and gardeners!